A hundred years of Sun Ra

About a month ago a lot of people went mad on Shakespeare’s birthday. But today marks an even greater milestone in the history of culture, greater even than the arrival of Alfred Jarry. 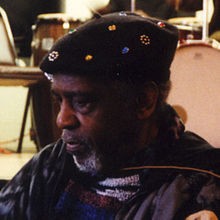 Sun Ra, or Le Sony’r, arrived on this day 100 years ago. His contribution to world culture is arguably greater than the likes of Shakespeare and Ancient Greece. If that’s too much hyperbole for you to swallow, then you might concede that Sun Ra is to jazz what Shakespeare is to language. Still hard to swallow? Okay, perhaps you’ll accept that Sun Ra was a citizen of the cosmos in the truest sense. After all, he did come to Earth from Saturn via transmorphic teleportation, took the form of an Afro-American and educated the world with his myth science Arkestra. For the sceptics, here is incontrovertible myth-scientific evidence of Sun Ra’s Saturnian heritage. Read on…

It was a balmy midsummer evening in greater London. I happened to catch a radio show on the life of Sun Ra, an artist whose humble charisma, musical genius and penetrating equations inspired the next generation of cosmic free-jazzers.

As Roger Waters might say, it was like a bunch of candles had lit a dark corner in my mind. Unfolding waves of enlightenment washed over me until, in Blakean terms, the doors of perception were cleansed. In this case, however, it was the ‘door of the cosmos’. For once in my life I dared to knock on that mysterious door.

Sun Ra taught us that all of existence is extraordinary; he enriched the world of jazz with an extra-spatial dimension; and at the age of 79, after decades of Cosmusical Arkestration, he chose to re-transmorph to Saturn.

At his deathbed he told the nurse where he was going. Naturally she assumed he was delirious. Concerned, she told the doctor: ‘He keeps telling me he’s going back to Saturn.’

The doctor gave her a look of disbelief and threw up his arms. ‘It’s Sun Ra! Everyone knows he’s from Saturn!’

There you have it: bona fide evidence of Sun Ra’s Saturnian heritage. In a mainstream context, you cannot get more authoritative than a doctor.

Even if you remain unpersuaded, you will surely accept that his skill as a musician, composer and arranger was immense, and his creative vision was (and continues to be) up there with the likes of William Blake.

Anyway, whose birthday party would be more interesting: Shakespeare’s or Ra’s?

I think we all know the answer to that one.

← In memory of William Wordsworth

Simon Kohli is a freelance writer with a penchant for absurd satire. He also does copywriting, content creation and marketing strategy for independent businesses.

In memory of William Wordsworth

While everyone’s popping corks and toasting Shakespeare’s 450th birthday, spare a little thought for another bard: William Wordsworth On this day, 164 years ago, William Wordsworth drew his final breath and entered the timeless world of venerated poets and artists....

5 Reasons Why You Need a Copywriter for Your Website

Neglecting your web content is like hitting your own foot with a hammer – repeatedly! Here are 5 extremely good reasons for hiring a professional copywriter for your website.

You have Successfully Subscribed!